On the 26th of August, a group assembled in the old DDDA building on Custom House Quay. Present were parties with an interest in the future of the Grand Canal Basin.

The Docklands Business Forum presented their vision for the Grand Canal Basin, one they have been promoting as the best option for the future of the site. The proposal was received enthusiastically by parties present at the meeting. However, it will not be an easy road in making this vision a reality as groups such as NAMA, Waterways Ireland and Dublin City Council need to work together to find a common ground when planning the future of this site.

The current state of the site was described as an ‘eyesore’ at the meeting and it was agreed by all parties that the potential developments of this site should be handled very carefully; with all interested stakeholders view’s represented.

The Irish Times have also covered this topic and published our views on the future of the Graving Docks, take a look here. 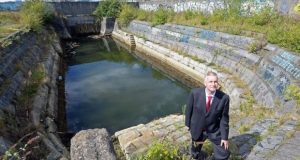