THE TAOISEACH HAS heard calls to create a ‘Docklands Tax’ to help tackle problems in Dublin’s north inner city.
A meeting earlier this evening saw Enda Kenny meet with all public representative from the Dublin Central constituency – the area where much of the recent gangland activity has taken place. 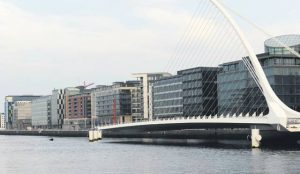 Also in attendance at the meeting were Tánaiste Frances Fitzgerald, minister for public expenditure and reform Paschal Donohoe and minister of state Damien English.
Speaking at the meeting, Workers’ Party councillor Éillis Ryan proposed levying a tax on large businesses in the Docklands and International Financial Services Centre (IFSC).

“The north inner city requires large-scale, sustained public investment to help reverse the neglect of decades,” said Ryan.
Businesses in the Docklands and the IFSC have benefited hugely not only from their prime location in the north inner city, but also from a range of state support and infrastructural investment.

Speaking at a press briefing earlier this evening, minister Donohoe did not offer a specific response to the proposal, but said that the redevelopment of the area would be part of a strategy to tackle social problems.

As part of this there are plans to further invest in the Docklands, which Dublin City Council has designated as a Strategic Development Zone.
There are also plans for a large residential construction project is set to begin later this year at the top of Sheriff Street.
The meeting today also focused on security issues in the north inner city.
Minister for Justice Frances Fitzgerald said that she was “very conscious” that the “heavy garda presence is very difficult for the families”, and that she was working toward a situation where “normal policing” could resume.
It was also mentioned that community policing is at the heart of plans for the north inner city.