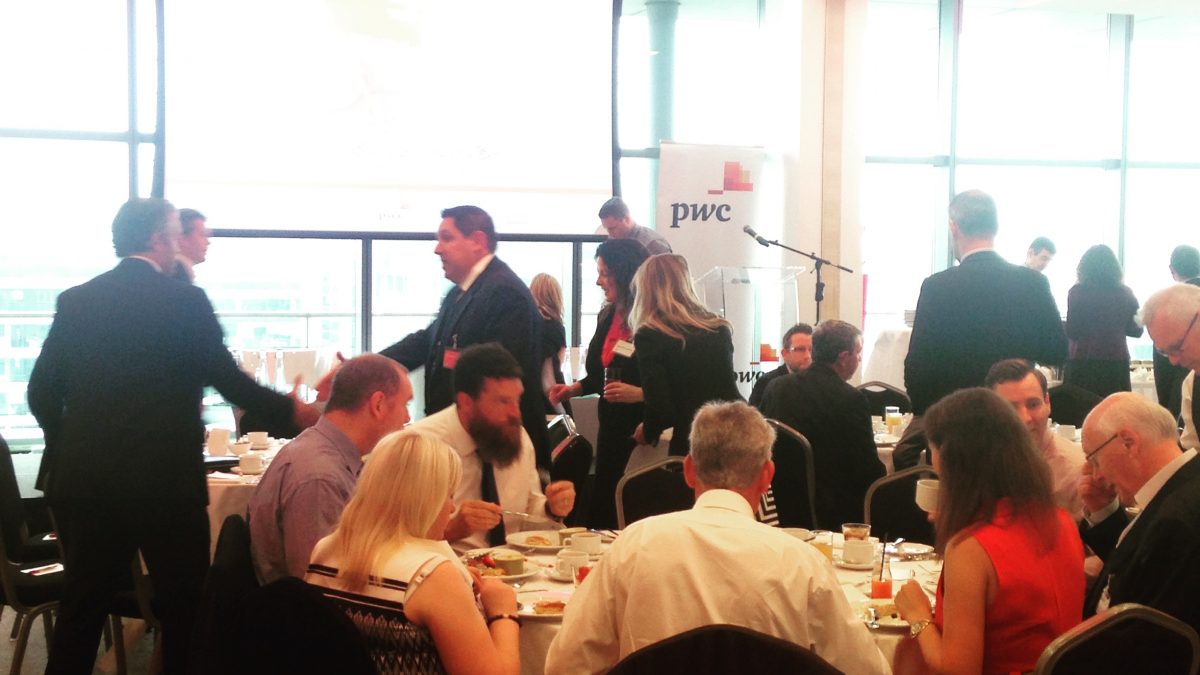 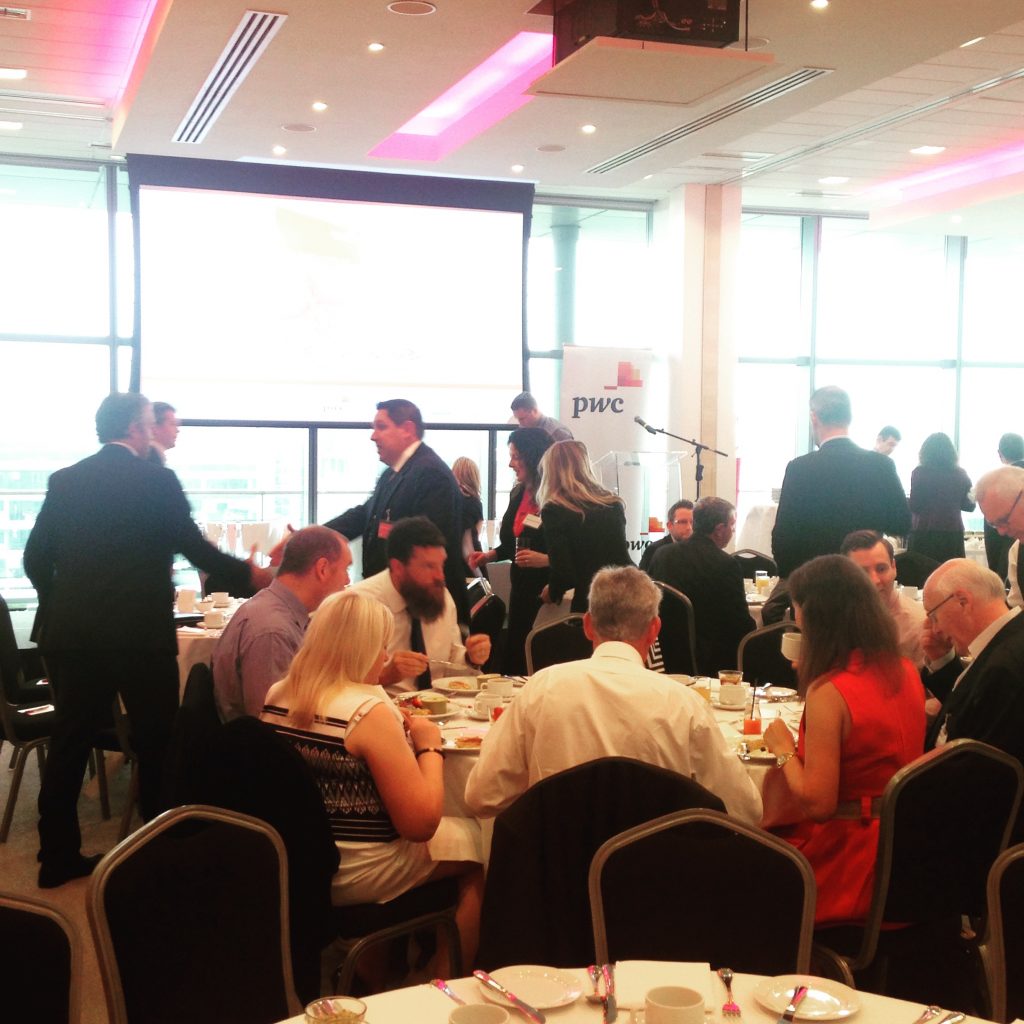 With the clock ticking down to the British referendum that will decide the UK’s relationship with Europe for generations to come, the Docklands Business Forum hosted a Brexit Breakfast forum to shed some light on the uncertainty that overshadows Ireland’s future relationship with Britain. While the room chatted and mingled over croissants and fruit compote at 7.30am, Wednesday 8th of June in the PwC Spencer Dock offices, many lost their appetites as Fergal O’ Rourke, Senior partner at PwC, introduced the sobering topic of the breakfast’s events – how the Irish economy with ‘the most skin in the game’ in the upcoming vote will be impaired should the result be a British exit. He set the tone for the morning stating that he gives strong support to a ‘remain’ vote. After an address from Docklands Business Forum’s chairman, Michael Hart, CEO Alan Robinson introduced the panel.

First to tackle this topic was Dr. Luke Redmond, PwC Advisory Consultant. Redmond stressed: “the EU needs stability not uncertainty”. He divulged the dangers of uncertainty that surround this Brexit: uncertainty for the Irish economy, the British economy and an uncertainty of the relationship between the two. With Ireland and the UK tied up in a mutually beneficial economy the effects could be catastrophic. After a breakdown of the recent polls he delineated how the battleground of this Brexit is over age, gender, income, education, race and voter mobilization. He was the first but certainly not the last on the panel to argue that voters need to be mobilized and a high turnout is essential for a ‘remain’ vote. With over 3 million EU workers in the UK, he pointed to the social issues that would emerge such as migration and welfare. Another danger discussed was the pressure a Brexit might put on other countries such as the Netherlands, to leave too. Overall Redmond had a strong opinion that the UK should remain firmly in the EU. 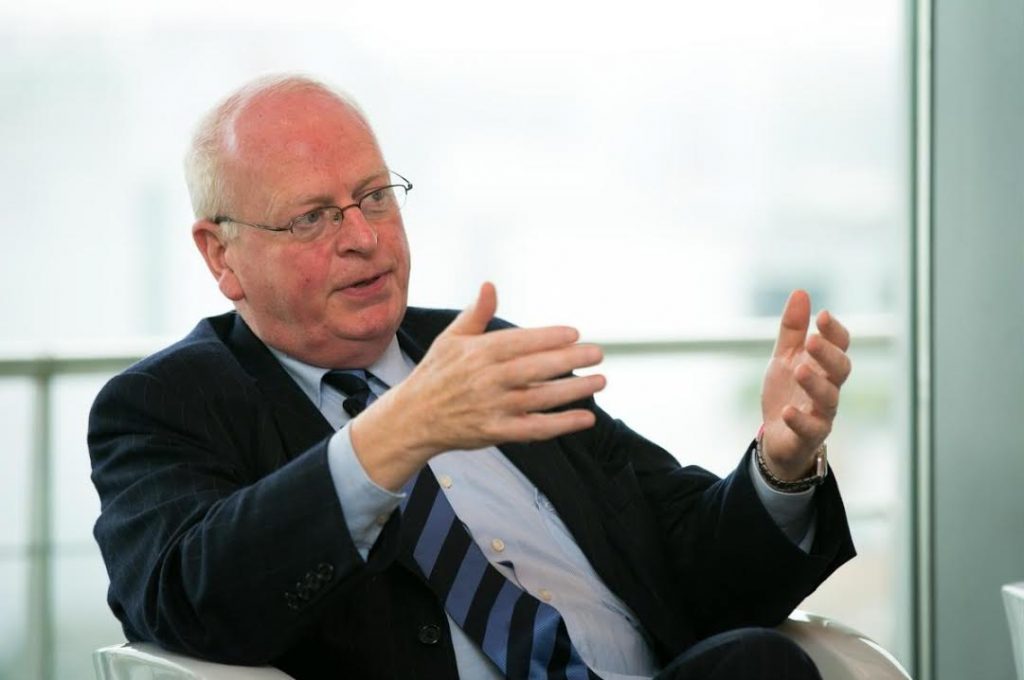 Senator Michael McDowell, was next on the panel to give his views on the referendum. He did not delve into the economics of what would occur in the event of a Brexit, he chose to divulge how it is the dynamics of the debate leading to the referendum that matter the most. He reviewed the ‘head versus the heart’ issues involved in this referendum McDowell pinned referendums, as ‘processes by which you get an answer you didn’t expect, from a question you didn’t ask’. McDowell is of the view that Ireland is in serious trouble if this referendum passes. McDowell is fearful that the loss of ‘our one constant ally’ with whom we share effectively the same legal and constitutional traditions and a border, will lead to the domination of civil law in Europe and business instability and uncertainty in Ireland. He reasoned that the leave campaign had a ‘trump like’ essence, with the British population striving to be a strong nation once again, returning to its former glory. It was alluded to that perhaps the power of discourse in this referendum debate has made the British population ignorant to the actual economic and social implications of a Brexit. Ireland has the most to lose in the event of a Brexit and Senator Michael McDowell is calling for the Irish to influence those that they can to vote ‘remain’. He underscores that sometimes referendums are won when voters only consider which side are most likely to be victorious, rather than what they actually want. 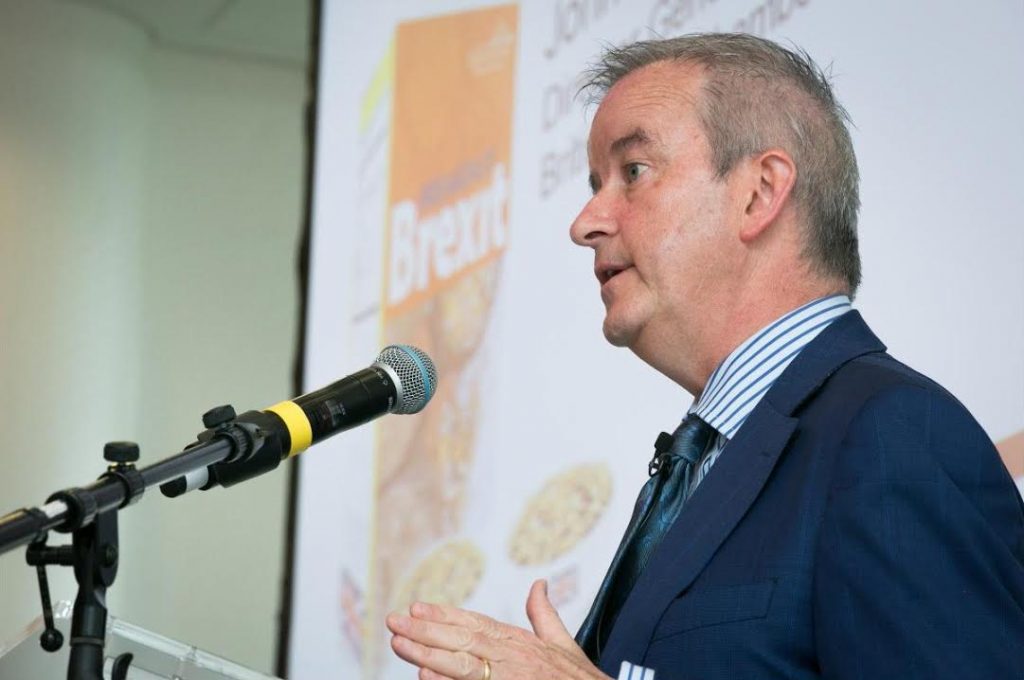 John McGrane, Director General of the British Irish Chamber emphasized the importance of high political activity from the British public for the ‘remain’ vote to come through. With 1.2 million already registered to vote he posits that ‘democracy is alive and reasonably well’. He concluded that middle England and the South Coast will all vote to leave so the rest of the country need to ‘get out of bed and vote”. It was nearly a call to arms on his behalf to go and shake the remaining voters to get out and vote, he urged everyone in the room to go and phone a friend in the UK. McGrane mentioned food as one industry that would suffer in both Britain and Ireland in the event of a Brexit. Food is a 2- way trade between Ireland and Britain, co-manufacturing and co-mingling – ‘economically joined at the hip’; it is 10% of our economy and 10% of our jobs. McGrane was concerned about how the increased tax and growing prices would affect this trade. Drawing a (sort of) silver lining on the ominous cloud at breakfast McGrane proposed that this Brexit will shake up the EU and we can use this opportunity to bring about a ‘Europe that we all want’. The positive McDowell concluded that in the event of a Brexit, ‘the world will not stop turning’. However he is firmly of the view that ‘the U.K. should remain in the strong, strengthening and reforming EU’.

Last to join the breakfast Brexit panel was Marie Hunt, executive director and head of research and CBRE. Hunt deemed uncertainty as the enemy of the commercial property market, which is precisely what the Brexit has in store. Hunt concluded that the Brexit would be brutally bad for the commercial property market. With increased tariffs, levels of bureaucracy and border controls for UK business in Ireland, Hunt predicts the flight of many businesses from our economy. The currently high and strong UK retailer relationship with Ireland will suffer along with office occupier space resulting from a decrease in jobs in food, pharmaceutical and high tech business areas. The uncertainty and instability of the economy will have sizable negative effects on the hotel and investment markets as the sterling’s value weakens. Hunt concluded that there is a slight chance that Dublin could benefit from the relocation from London that the Brexit will initiate. However she feels that Paris and Frankfurt will receive most of the benefits. Overall Hunt concludes that the ‘negatives outweigh the positives’ and she is in strong favor of a ‘remain’ vote. 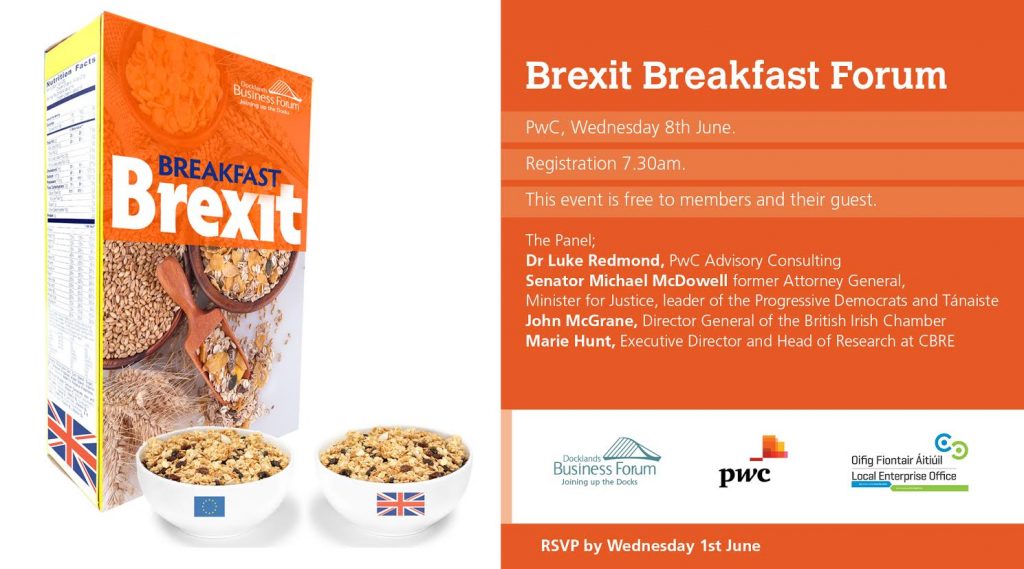 Outside of London, Britain isn’t happy, the recovery hasn’t been felt but a raw deal from joining the EU has been. Joining the EU has resulted in diminishing British identity. Will the British ignore the economics of the situation and vote irrationally to see the return of a more independent nation?

It seems a positive outcome for the Irish in the referendum could hinge on the British youth with both McDowell and McGrane discussing the importance of them registering to vote – Glastonbury or no Glastonbury! With young people showing a strong ‘remain’ vote in the polls, will they all turn up on the day Throughout the Q and A session a point was made in admiration of the ‘leave’ campaign; at least they are putting forward compelling arguments and a strong campaign. The ‘remain’ side is one that lacks charisma, energy and a compelling argument. Will this referendum be won through political matters, campaign strategies and a general public ‘feeling’? Certainly, there is a need for a more rational thought in this campaign, a strong voice of reason indicating to all voters the severe economic implications of leaving the European Union. Will the Irish voice be loud enough to be heard?

Throughout a breakfast clouded with uncertainty and anxiety one point was starkly obvious – phone a friend in the UK!