It was a big night for Dublin’s Dockland business community at the Gibson Hotel on Thursday, 29th November when the envelopes were opened and the winners of the second Docklands Business Awards were revealed. There were 48 shortlisted nominees in ten categories. The list of organisations represented on the night read like a who’s who of Dublin’s premier business hub. Accenture, o2 Telefonica, HBSC, Savills, A & L Goodbody, Beauchamps, UPC, Bank of New York Mellon, Willis, Dillon Eustace, Dublin City Council, the Tall Ships Committee, the RPA, the National College of Ireland, Waterways Ireland, the Dublin Port Company and The CCD lead the big organisation pack across many of the Awards.

Our friends in the Docklands hospitality sector were also well represented with the Gibson Hotel, Jury’s Inn IFSC, the Clarion Hotel IFSC, the Clayton Hotel Cardiff Lane (formerly Maldron Hotel Cardiff Lane) and the new Marker Hotel Grand Canal Plaza. All nominees were in contention to take back to the office some of our city’s most unique, and reasonably priced, crystal ware.

The Minister for Small Business, John Perry T.D., opened the evening’s proceedings. “We need associations like the Docklands Business Forum who have not only created a supportive enterprise environment to help local business flourish but also play a central role in society and local communities” said the events most senior political participant. “They are to be commended for the commitment to making a real difference to the local community and the businesses within. Every one of these Businesses in the Dublin Docklands who are willing to take a risk are playing their part in getting Ireland back on track and are contributing in a tangible way to the wellbeing of the local communities.” 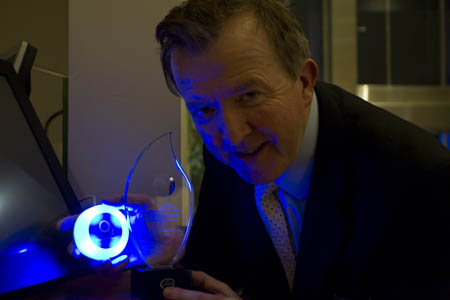 Last year’s Awards kicked off with Dragon Niall O’Farrell of RTE’s Dragon’s Den having difficulty pronouncing ‘not for profit’ when describing the Docklands Business Forum. This year kicked off when co-MC for the evening, Corporate Responsibility Manager for A & L Goodbody, Sinead Smith, took to the podium to announce the first round on short listed nominees.

The Public Sector Award, sponsored by IDEA, was next up with DDDA and short listed for the evening Waterways Ireland, Tall Ships Committee/Dublin City Council, Dublin City Council Communications Unit and Dublinia all in contention, the Winner – Waterway Ireland. CEO John Martin accepted the Award on behalf of his organisation, at table full of which had travelled down from Carrick-on-Shannon for the evening. Waterways Ireland won the Award for its sustained support to the Docklands area through its grant funding of the Docklands Summer Festival. 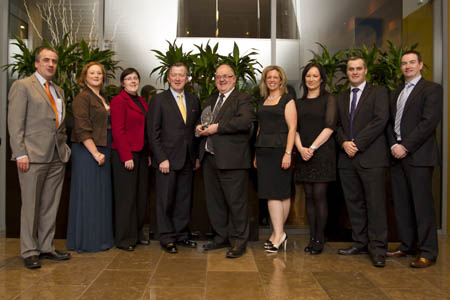 The MCs for the evening were getting into their rhythm by the time the third Award, Docklands Innovator of the Year was announced. Airmid Health Group, O2 Telefonica, Ancestry.com and Realex Payments were all in contention for this highly prestigious Award. The Minister handed O2 Telefonica the heavy glass with a team including Liz McLaughlin and Johanna Cullen going to the podium accept it. O2 won the Awards for its Dockland Deals App.

As the room began to buzz, with mostly friendly banter, it was noticed that the hotelier’s tables went quiet as the Docklands Hospitality Award nominees were announced. This Award was sponsored by the Dublin Port Company. Competing were the new Marker Hotel on Grand Canal Plaza, the Clayton Hotel Cardiff Lane (formerly Maldron Hotel Cardiff Lane), The Gibson Hotel, Jury’s Inn IFSC and the Clarion Hotel IFSC. The winner – Jury’s Inn IFSC, accepting the Awards was Patrick Cass, General Manager.

The last Award to be presented before a break for the meal was the Corporate Social Responsibility Award sponsored by Savills. The nominees were HSBC, Social Entrepreneurs Ireland, Accenture and the Dublin Port Company. Corporate Citizenship Lead Carmel Halpin and Consultant Brian Smyth accepted the Award from the Minister on behalf of Accenture. Accenture won the Award for their volunteer’s contribution to the Business Forums Docklands Volunteer Clean Up. 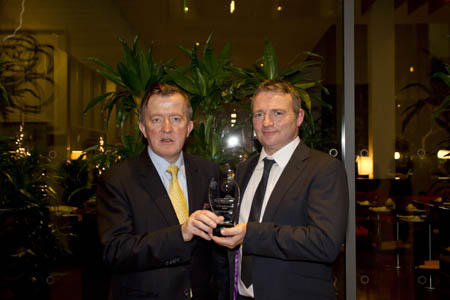 The Gibson gave flawless service with the buffet. Food was served from both sides of the room with desert and teas & coffees served to the tables. Wine for the evening was supplied by our friends at Mitchell & Son in CHQ. The rattle and hum of the meal peacefully died down as the ceremony resumed with the presentation of the Environment Award, kindly sponsored by An Taisce. The Docklands Business Forum & O2 Telefonica, the Rail Procurement Agency, the Dublin Port Company and Busy Bees all competed for the most politically correct of the nights Awards. Bernie Malone, Managing Director of Buys Bees, enthusiastically seized the crystal from the Ministers outstretched hands. Busy Bees won the Award for reducing waste by creating a market for second hand furniture.

The four companies vying for the Exporter of the Year Awards, sponsored by the Dublin Port Company, were HSBC, BNY Mellon, Realex Payments and Dublin Port. The winner – Dublin Port. The Port’s Chief Engineer Eamon McElroy accepted the Award on the company’s behalf. The Port won the Award for its recent modernising programme and increasing the Ports efficiency and improving service standards.

As the time approached 8.45pm the night was coming to a dramatic conclusion with the last three Awards of the evening. The stiff competition for the Company of the Year Award, sponsored by BoConcept, was between O2 Telefonica, Jury’s Inn, GRIP Communications and the Convention Centre Dublin. As both Telefonica and Jury’s had crystal wear already the tension for this one was mostly on the CCD and GRIP. As Minister Perry announced the winner CCD Chief Executive Nick Waight and Head of Marketing & Communications, Elaine Phillips jumped to their feet. The CCD won the Award for successfully attracting business to the Docklands and promoting a professional and contemporary image of Dublin.

Sinead Smith explained the next two Awards, the Docklands Business Forum Company of the Year and the Docklands Business Forum Person of the Year, sponsored by the Maldron Hotel Cardiff Lane, were unique in that the winners was decided by an election of members. First up was the Forum Company of the Year. The nominees were IDEA, DCH Partners, Jury’s Inn, Dublin City Radio, O2 Telefonica, The Gibson Hotel and VIP Taxis. Managing Director Ciaran Flanagan collected the Award on behalf IDEA. In saying a few kind words about IDEA Forum Chairman Alan Robinson said “most of what IDEA does for the Forum is pro bono. From tonight’s PowerPoint presentation to the art work on our recent Newsletter, the team at IDEA has made a big difference to how the Forum more professionally and effectively communicates.”

The closing Award of the evening was the Docklands Business Forum Person of the Year. The nominees were; Michael Harte Mail Boxes Etc, Nicholas Cloake DCH Partners , John McElhinney John McElhinney & Co, Regina Dunne National College of Ireland, Alan Robinson SME Communications, John Treacy Treacy Consulting, Ciaran Flanagan IDEA, Betty Ashe St. Andrew’s Resource Centre, Tim Darmody Darmody Architects. While accepting the Award, Nicholas Cloake said some kind words about this year’s recipient Alan Robinson, “when you see a call coming in from Alan you know he is going to ask you to do something free for the Forum, but you still take the call.”

The evening was a great success and closed with a thank you to all involved in its organisation. Particular thanks to Robert Colleran at Vincent Finnegan, to Nicholas Cloake from DCH Partners for all the hard work he did on the design, artwork and communications, to Ciaran Flanagan from IDEA for all the work on the nights PowerPoint,  to Johnny McElhinney from John McElhinney & Co. for looking after the accounts and invoicing. Thanks to Michael Harte from Mail Boxes Etc. for all the ringing around. To Sinead Smith for looking after the vote counting and doing the MC work on the night and Alan Robinson for getting sponsors, flogging tickets and generally being the events manager and chief bottle washer.