This year’s Waterways Ireland Docklands Summer Festival was a great success. We had capacity crowds again. There was a queue for market stalls and funfair amusement providers. The on-water come try it sessions could facilitate only a fraction of those offering to participate. 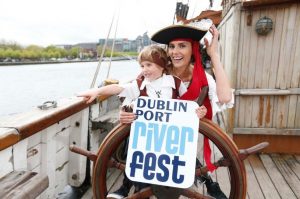 We had unprecedented buy in from local businesses; local hotels gave us weekends away for competitions, local restaurants gave us meals for our Wakeboarder guests and cafes gave free coffee for our volunteers. Bank of Ireland helped out with the cost of the Golf Challenge and the Maldron Hotel Cardiff Lane contributed to the Duck Race.

After reviewing the social media activity communicating and sharing about this year’s festival from all over the world Des Burke Kennedy wrote to tell us that the Waterways Ireland Docklands Summer Festival is now a Global event. 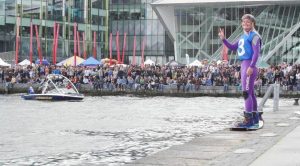 The 3rd Dublin Port River Fest was officially opened by the Lord Mayor in the Round Room of the Mansion House on Thursday 28th June. The arrival of the tall sailing ships through the Eastlink Bridge once again signalled the beginning of the Dublin Port River Fest and was video captured by a number of media groups including VisitDublin.ie. The larger ships; the Morgenster, the Pelican of London and the Kastelot roved particular crowd pleasers, with queues each day for visiting.

The on-water performances of both the Tugboats to capacity crowds of spectators along the length of the Quay each day proved to be the most popular activity on the water. The food and craft markets all proved very popular with the public with queues for many of the stalls at peak times.

We had twelve fairground attractions this year. They provided a broad range of amusements, from carousels and games for small children to more teenage entertainment. Most of the amusements proved very popular.

The live entertainment on stage was a great crowd pleaser. Parents with small children took the opportunity to relax from the festival activity and watch some of the all day free entertainment. The coast guard were delighted with the stage as their performing area and did some very informative and entertaining demonstrations. The shanty singers deepened a sense of maritime culture to the event while the traditional dancing was top class.